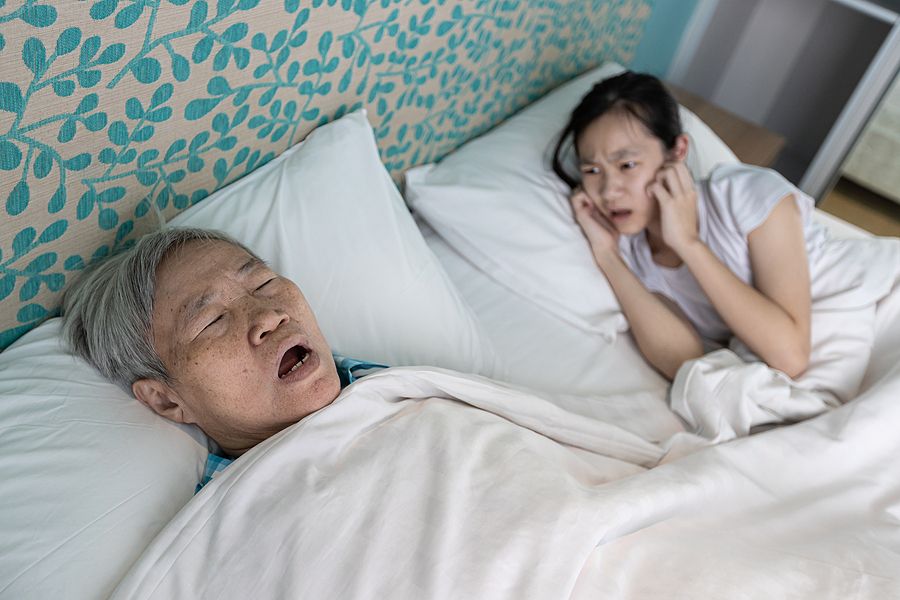 Sleep apnea is a medical condition in which breathing is interrupted or becomes very shallow while you sleep. It can occur multiple times throughout the night. This typically results in shallow breathing or breathing pauses during sleep. Breathing pauses can last anywhere from a few seconds to a few minutes.

According to the National Institutes of Health, roughly 22 million Americans are affected by sleep apnea. While sleep apnea is more common in men, women are more likely to have sleep apnea symptoms during their pregnancies. In children, sleep apnea often goes undiagnosed but can affect their behavior and development.

The most common symptoms of sleep apnea are:

Difficulty in Breathing During Sleep

Loud snoring is the most obvious symptom of sleep apnea. If you sleep next to someone with sleep apnea, you will hear loud snoring as the patient tries to catch their breath.

If you suffer from sleep apnea, you may have trouble falling asleep, wake up frequently throughout the night, and have difficulty getting enough rest.

Morning headaches are a common symptom of sleep apnea. The effects of sleep apnea can impair your ability to get a good night's sleep. This affects your brain chemistry and can cause headaches in the morning.

You've probably heard that sleep apnea can affect your behavior, including your temperament, mood, and more. But you may not realize that this can extend to your temper. If you often find yourself irritated, short-tempered or easily angered, sleep apnea may be the culprit.

Sleep apnea is known to cause irritability because it prevents your breathing at night. If your lungs aren't able to completely fill with oxygen, this can lead to irritation, especially when you have to wake up to get enough oxygen.

The sleep disturbances caused by sleep apnea can also contribute to your irritability. Sleep apnea causes you to wake up frequently throughout the night, which in turn, reduces your sleep quality. This, in turn, can cause depression, anxiety, stress, and other undesirable emotions.

Sleep apnea may also cause serious fatigue and daytime drowsiness, which can interfere with your productivity and mood.

Sleep apnea is a sleep disorder that causes a person to stop breathing throughout the night. This lack of oxygen can cause a number of side effects, including memory problems.

A dry mouth is a telltale symptom of sleep apnea, and it can also be caused by other medical conditions. When you sleep, your muscles relax, including the muscles in and around your mouth. A dry mouth is a side effect of this.

A dry mouth can lead to some serious oral health issues. Bacteria can build up more easily when your mouth is dry. A dry mouth also causes bad breath, tooth pain, and tooth decay.

Improve Your Smile With Cosmetic Dentistry

Sleep apnea is a medical condition in which breathing is interrupted or becomes very shallow while you sleep. …

Everything You Need to Know About Dental Lumineers

Sleep apnea is a medical condition in which breathing is interrupted or becomes very shallow while you sleep. …

Thank you for Submitting your request. Our Office will get back to you.